There’s people making a killing on the Asian domain grab of short domains.? If you had the foresight to get in before or at the start of it all congrats because you’ve done well for yourself.? I did not and I’ve chosen to sit on the sidelines for this instead of trying to jump in and I’ll tell you why.

Picture a bell curve.? If you can’t then here’s a picture: 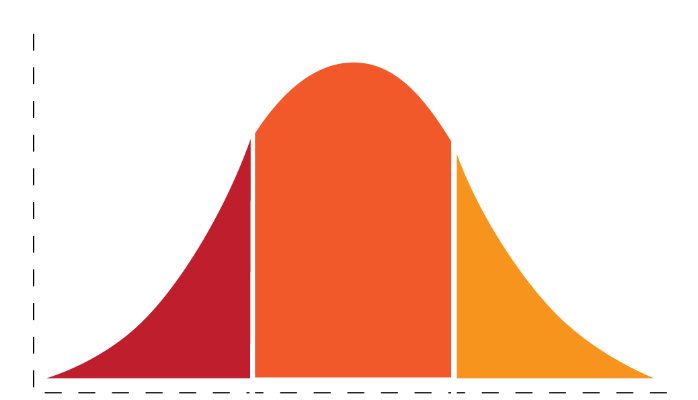 If you got in on these domains during the start (red section) you got in when the going was good on the uptick.? If you get in during the orange part of the curve then you will most likely lose money or break even.? The reasoning for this is because only a few lucky people will time the peak perfect.? Once the decline begins some people will think there’s a rebound coming so they’ll hold on longer.? And some people will sell because they know the peak has happened and now its on the decline and they’ll be lucky to scrape a small profit or break out even.? And if you buy or sell during the yellow section you are going to be a loser.? This is all assuming that these domains act like a penny stock where the bell curve scenario I just mentioned is very relevant.? I believe they will.

This is also like a penny stock scheme because there’s no fundamentals.? There is nothing supporting these prices besides the people jumping in and buying them for even more then they sold yesterday because of the hype.? That’s all there is supporting these domains, hype.? There’s no practical use for most (or all) of these domains, just like there’s no true value for a pink sheet company that has $0 revenue and no true future prospect of revenue.

With no fundamentals, and hype that will eventually fade there can only be a decline and I’m guessing it will be a fast and steep one at that once it begins.? It’s also curious (and interesting) that no one has seemed to pinpoint the reasoning for the start of the hype.? I’ve read that people in Asia as looking for alternative places to put their money, but why now?? I’m not buying that theory.? They could find their way into bitcoin if they wanted an alternative investment.? Or foreign real estate.? Or one of a ton of other options.? These domains could be had on the drop for $12 at GoDaddy for years and all of a sudden now they are a good investment?? Just like a penny stock pump and dump scheme its hard to pinpoint where the pumping began but the stock’s price action is almost always the same.

If there’s a company that will pay big bucks to take random gibberish like YQZL.com or NXWQ.com or 86922222.com or 12388890.com and turn them into legit businesses then I’d love to see it.? There’s literally millions of variations of these types of domains that have had their prices pumped up yet the prices act like the domains are very scare.? Reminds me of the great tulip bulb price crash story which if you aren’t familiar with you can read here:? http://www.investopedia.com/features/crashes/crashes2.asp??

I wouldn’t want to have a barrel full of tulip bulbs (or meaningless/worthless domains) in lieu of cash.

This all of course is my own personal opinion so take it for what you will.? The last thing I want to do is spend big bucks on garbage hoping that someone else will pay me a premium to take the garbage off my hands.? Yes, you could time it right and make a profit, but this isn’t domaining just like pink sheets aren’t stock investing… it’s a gamble so be prepared to hit a home run or go home empty handed.

A DOMAIN IS A BRAND. BRANDS CREATE VALUE. BUSINESS IS BUILT ON VALUE.

How do you want potential customers to view your business? A domain name is your first representation to the outside world and it speaks volumes about who you are. The right domain can instill trust, create a brand, lead to a high customer return rate, and open doors. The wrong domain will put you well behind where you want to be. Exponentially increase the probability of success with a premium domain.